A frozen leopard shark (Triakis semifasciata). This species is a carcharhiniform and belong to the triakid family. (Photo: Mohamad Bazzi.)

An ocean scene before the asteroid hit the Earth. In the background is, a mosasaur and anacoracid lamniform shark, both of which, suffered extinction at the boundary event. In the foreground are a number of different triakid sharks, a group that diversified in the extinction aftermath. (Image courtesy of Julius Csotonyi)

The famous mass extinction of dinosaurs also impacted oceanic animals and in particular, sharks. A new study reveals how the balance of modern shark biodiversity can be traced back to this very event.

The global disaster at the end of the Cretaceous that extinguished the dinosaurs on land, pterosaurs in the air, and gigantic marine reptiles in the sea, is familiar to most of us. However, scientists understood relatively little about the extent to which the asteroid impact affected another dominant predator: Sharks, which were then, as they are now, the dominant predators of the sea.

Nearly 500 shark species divided into nine distinct lineages roam the seas of the world today. The largest of these groups, accounting for more than 280 species, are Carcharhiniformes, or ground sharks. This represents a remarkable assembly of predators, including species such as the scalloped hammerhead, tiger shark, sandbar shark, and oceanic whitetip, along with a range of smaller and less intimidating forms known collectively as triakids or houndsharks.

The most iconic killing machine of them all, the great white shark, is not a carcharhiniform: It belongs to a much smaller group, namely Lamniformes or mackerel sharks, which comprises a mere 15 species including makos, porbeagles and thresher sharks.

But why is there such an uneven distribution of biodiversity among sharks? This question has perplexed evolutionary biologists like us for a long time. Explaining it straightforwardly in terms of its “causes” also remains very difficult. All we knew was that the equilibrium of modern ecological diversity appeared to coincide with the end-Cretaceous extinction event 66 million years ago.

So, in our new study, we examined the shed teeth of these two closely related groups of sharks and can now pinpoint a timeline that marks the beginning of a shift between them and their changing dominance on the ocean ecosystem. This transition does indeed coincide with the famous mass extinction of the dinosaurs, and marks the start of a pattern that has continued to this day.

Unlike other Cretaceous marine predators, such as mosasaurs and plesiosaurs, sharks survived the end-Cretaceous mass extinction and still thrive in the seas of today – but that does not mean that they were unaffected by the disaster.

Previous global investigations of Cretaceous shark extinctions have shown that the number of species dropped markedly, much like other marine organisms.

A more focused analysis of shark extinction and survival at the world-heritage UNECO site Stevns Klint in Denmark – where the sequence of sediments spans the asteroid impact layer – also found a loss of biodiversity across the boundary event.

These analyses relied on counting the number of ‘species’ before and after the event; a straightforward approach, but one that fails to capture much of the biological significance of the patterns in the fossil record.

To overcome the difficulties of reliably estimating past biodiversity based on ‘counts’, we decided to instead explore changes in shark tooth morphology, rather than rely upon ambiguous species definitions, to track major lineage turnover across the Cretaceous extinction timeframe. 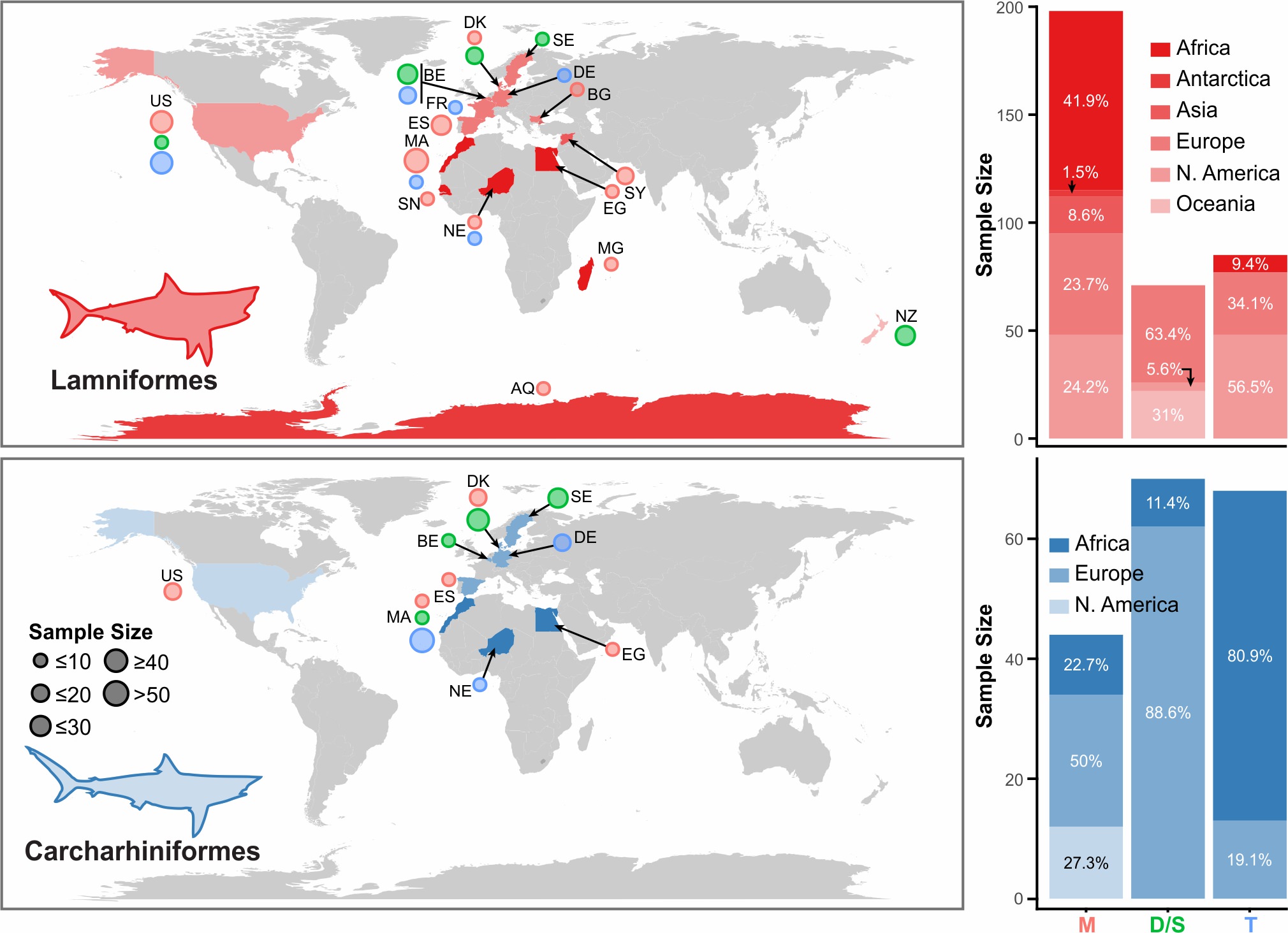 An ocean scene before the asteroid hit the Earth. In the background is, a mosasaur and anacoracid lamniform shark, both of which, suffered extinction at the boundary event. In the foreground are a number of different triakid sharks, a group that diversified in the extinction aftermath. (Image courtesy of Julius Csotonyi)

Sharks are a rather peculiar group of vertebrates. Their skeleton is made from cartilage, the same flexible tissue that supports our ears and nose. Unlike bone, cartilage usually does not fossilize, and skeletons of fossil sharks are thus very rare.

However, sharks continually produce new teeth by a kind of conveyor-belt mechanism, where the teeth gradually move out towards the jaw edge and are then shed. A single shark can shed hundreds of teeth during its lifetime.

The teeth are very hard and fossilize easily, which is why they are among the most abundant marine fossils and can be picked up as penny souvenirs from rock shops.

In short, the fossil record of sharks consists mainly of shed teeth. This might seem like a serious limitation, but in fact teeth are highly informative. Each species has a unique tooth shape, and these shapes correlate with different feeding habits. So, from teeth we can learn about the diets of extinct sharks and when species originated and went extinct, which is what we did in our new study.

More importantly, shark teeth represent a reservoir of morphological diversity, and can therefore be used to understand the adaptive evolution of these animals.

However, in order to draw out this information, we must look at more than just teeth. So, in our new study, we applied sophisticated computer-based modelling approaches to reconstruct the complex patterns of evolutionary change.

Shape diversity (disparity) before and after the extinction

By analysing the teeth of lamniform and carcharhiniform sharks on global and regional scales we discovered that these closely-related shark groups responded differently to this major extinction event.

The extinction certainly had a detrimental effect on particular lamniform groups, chiefly the anacoracids, a radiation of top predators much like White sharks, with a 45-million-year evolutionary history.

Other lamniforms were also affected, but we found an enhanced extinction signal for the distinctive teeth of anacoracids. Conversely, the extinction had a very different impact on carcharhiniforms, and especially the seemingly insignificant triakids, which diversified explosively in the aftermath of the Cretaceous extinction. 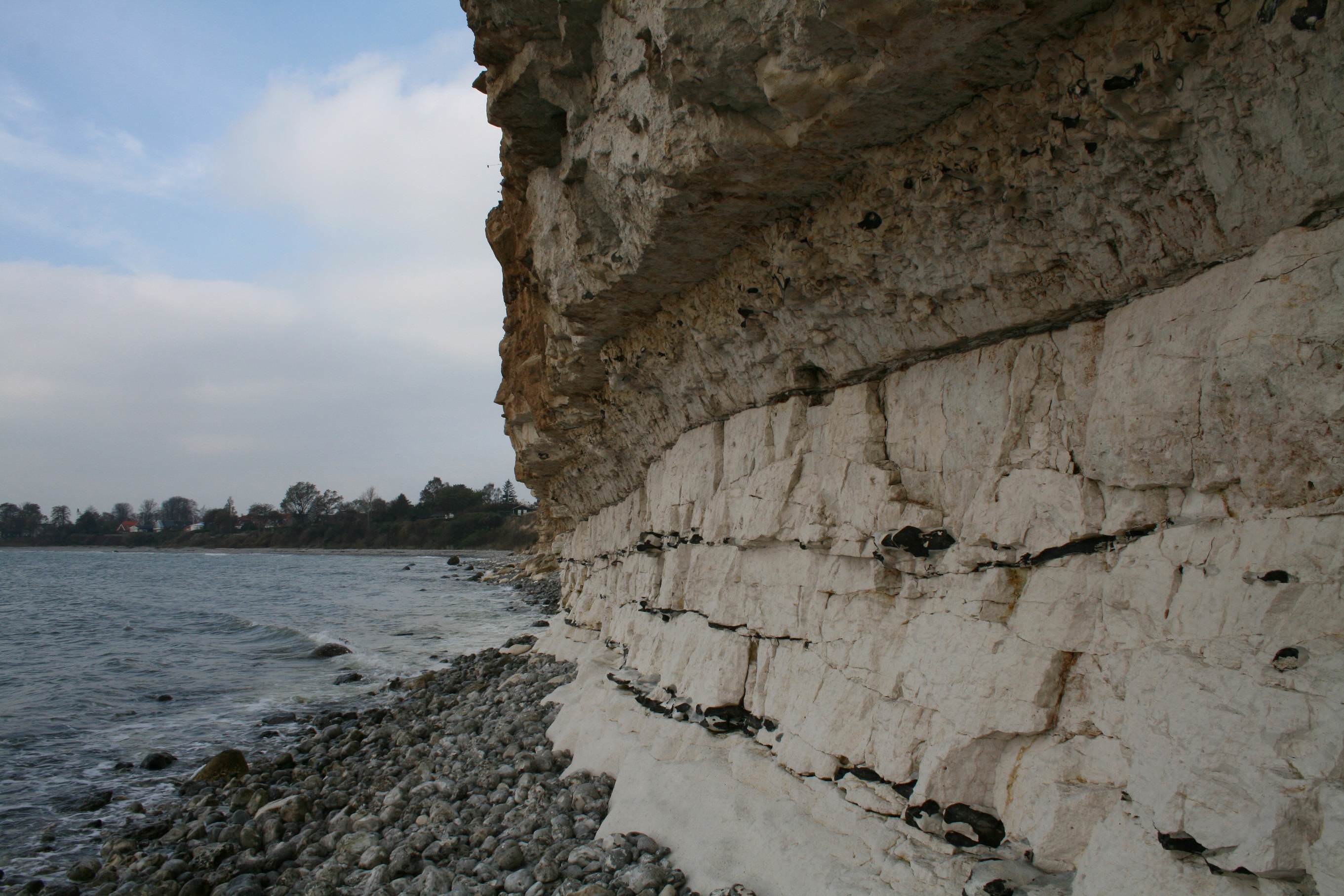 The asteroid impact layer is clearly visible in the chalk cliffs at Stevns Klint, Denmark. An analysis of shark extinction and survival at this location, also found a loss of biodiversity across the extinction event boundary. (Photo: Jesper Milan)

Food sources: Why did carcharhiniforms diversify?

So why did the extinction affect lamniforms and carcharhiniforms differently? Anacoracids seem to have been rather similar to living Tiger sharks and White sharks in their lifestyle. These species eat almost anything, and the White shark in particular is known to obtain much of its food from whale carcasses. Its diet becomes increasingly mammal-heavy as it grows bigger.

Abundant indirect evidence, in the form of bite-marks on bones, attests to anacoracids predating and/or scavenging moderate-sized marine reptiles and large bony fish. These prey items disappeared during the end-Cretaceous extinction, which might in part explain the demise of anacoracids.

But what about the success of triakids? Their teeth are quite similar in shape to those of anacoracids, which might suggest that they ate the same food, but triakid teeth are much smaller. Living triakids feed on small teleost fishes, and there is direct evidence from the fossil record from only a few million years after the end-Cretaceous extinction, of triakids with teleosts as preserved gut contents.

These teleost fish came through the end-Cretaceous extinction relatively unscathed, and underwent a subsequently massive diversification. It is therefore probably not a coincidence that triakids radiated at the same time as their inferred prey.

However, another ecological response known as 'mesopredator release' might have taken place, whereby the removal of apex predator anacoracids allowed ‘mesopredatory’ triakids – a category below the apex predators – to increase.

A man-made version of this phenomenon can be seen in modern oceanic ecosystems where large sharks have been selectively fished out. Since these proposed mechanisms are not mutually exclusive, we suggest that both could explain the complexity of the diversity patterns we see in our data.

A beginning of the rise to dominance?

The key finding of our study is that we determine a timeline for the beginning of the shift from lamniform to carcharhiniform ecosystem dominance.

The fossil record of these sharks suggests that lamniforms never managed to recapture their ecologically dominant position and sheer diversity of species after that fateful day when the asteroid struck.

It seems that the impact of a rock from space, 66 million years ago, still reverberates in the oceans today.

It is well known that polar bears accumulate alarmingly high concentrations of PCBs and other pollutants. It is now discovered that also Greenland sharks have contaminants in their bodies. The long-term effects remain unknown.

On any visit to a rocky seashore, you are likely to spot barnacles, unoffendingly stuck to hard surfaces. But barnacles in a fjord in Norway have become parasites that eat fish through feeding stems.

The Greenland shark: an overlooked creature

The Greenland shark is a mythicised and unpopular animal, perhaps due to a lack of knowledge. Now a research team has spent several weeks with some of Disko Bay’s Greenland sharks, where they performed risky experiments to find out more about the shark.

Culture is a strong evolutionary drive among killer whales

New study shows how some animals ended up looking very similar yet share almost none of the same genetic mutations.

What is the rose from the Selbu mitten doing in the remains of a medieval cathedral in Sudan?

What is the rose from the Selbu mitten doing in the remains of a medieval cathedral in Sudan?