What can linguistics tell us about the Vikings in England?

Recent articles discussing the Scandinavian input into the genetic make-up of the English population have reignited a debate about the number of Scandinavians who settled in England in the late ninth and early tenth centuries.

The most recent article published in the scientific journal Antiquity reported that up to 35,000 Danish Vikings could have settled England during this time—much higher than DNA evidence suggests.

One important piece of evidence that supports such high numbers of Scandinavians settlers is the great impact they had on the English language and in particular on place and personal names. However, separating the difference between Danish and Norwegian influence is often difficult.

What is the linguistic evidence?

The language spoken by the Scandinavians who settled in England is typically referred to as ‘Old Norse’ and, used in this way, refers to the language of Viking settlers from both Denmark and Norway. However,  Old Norse is also used more narrowly as a label for the language we find in Norwegian and Icelandic manuscripts, which date from the twelfth century and later.

However, borrowings from Old Norse into English or the Scandinavian influence on place names and personal names are more useful evidence when considering the question of how many Scandinavians there were.

In most of England, Scandinavians would have encountered speakers of Old English. Old English and Old Norse were closely related languages, and many words would have sounded the same or similar. For example 'house', which is hūs in Old English and hús in Old Norse. This means that basic communication between the Viking settlers and the Anglo-Saxons was probably possible.

We also find some Old Norse loanwords--words borrowed from one language into another--in Old English texts. However, there are only about 150 loanwords in total, and they are mainly specialist terms for objects or concepts often associated with Scandinavians and their activities. For example, some, like lagu in Old English, meaning ‘law’, relate to legal matters, others like hūsbōnda ‘house-holder’ describe social positions and some, like Old English cnear meaning ‘a small ship’ and cnīf meaning ‘knife’, describe objects that might have been associated with Scandinavian activities in England.

These borrowings are not dissimilar to the types of words borrowed from Old French into Middle English, which was spoken between 1100 and 1500 CE, after the Norman conquest of England. 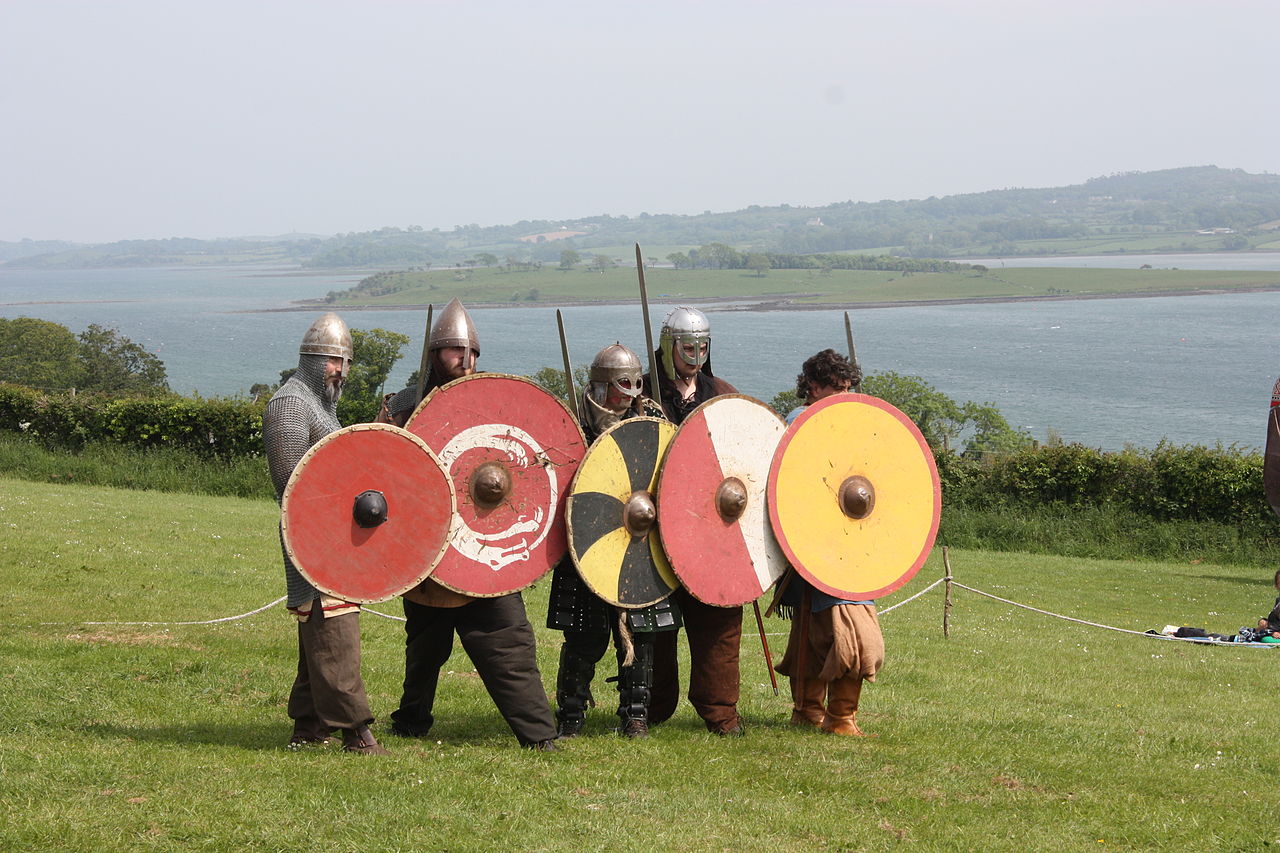 You can read all about the ongoing debate among linguists, archaeologists, historians, and genetists, regarding the extent of influence that the Danish Vikings had on England in a series of articles on ScienceNordic.

Why Danish Vikings moved to England

Archaeologists and historians clash with geneticists over Viking study

Bookmark our Viking theme page to stay up to date on the latest in Viking research from the Nordics.

In this case researchers know that the conquest did not involve large numbers of Old French speakers coming to England, but those that did come were of high social status.

Might we argue from this that the Scandinavian settlement of England similarly involved only a limited number of high-status settlers?

Read More: Dressed up with jewellery stolen in Viking raids

There are two reasons to answer this question with a resounding ‘no’.

First, most of the surviving manuscripts written in Old English are from Wessex, in south-west England, an area which did not see significant Scandinavian settlement.
So it is not surprising that few Scandinavian words were incorporated into the dialect of the region (West Saxon).

Second, the borrowings that we see in Middle English are of a very different character.

These include not only specialist words, but also (in their Modern English forms) basic vocabulary such as egg and sky, the pronouns they, them and their, common verbs like take, and prepositions like till.

These are some of the types of borrowings that we expect when there has been extensive contact between speakers of two languages and cannot be explained by contact with a small number of speakers of a more prestigious language.

Read More: The Viking Age should be called the Steel Age

The existence of many Old Norse place names is another form of evidence for the widespread use of Old Norse in England.

Most place names in England originated as descriptions of the places they referred to. For example, the numerous places names ‘Kirkby’ or ‘Kirby’ originated as an Old Norse compound meaning ‘church farm’ or ‘church settlement’.

Similarly, Helperby (North Yorkshire) originated as a Norse compound formed of a female personal name Hjalp and Old Norse býr – a word for a farm or settlement. The settlement was in this case named from association with a woman with a Norse name – perhaps the owner of the estate.

The number and variety of place names that are either entirely or partly Scandinavian is important evidence for Old Norse being widely spoken in England.

Read More: Viking sailors took their cats with them

Place names not recorded until after the Viking Age

Most settlement names were not recorded until 1086 CE, a couple of centuries after Scandinavians began to settle in England, when the Domesday Book, a survey of landholdings in most of England, was completed.

This means that we cannot be certain when many place names using Old Norse vocabulary were formed.

Read More: Viking movie will be entirely in Old Norwegian

Minor place names--the names of places smaller than settlements, including fields and minor landscape features—are also an important source of information about Scandinavian influence on the English language.

In areas where Scandinavians settled, minor names are nearly all recorded only from the Middle English period, after 1100 CE. These names are witness to widespread borrowing from Norse in eastern and northern dialects in England, even where the settlement names do not show evidence for this.

Enough minor place names survive in manuscripts for us to compare Scandinavian influence on Middle English dialects in different parts of the country. This was the subject of my doctoral research, which focussed on areas of North West England where we think settlement was predominantly by Norwegians rather than Danes.

Only a handful of similar studies exist, and they demonstrate that vocabulary of Old Norse origin that was used to describe the features of the landscape in eastern England during the later Middle Ages (1100–1500 CE) equalled or even exceeded that of Old English origin in parts of England.

Place-names and documentary sources also tell us about the use of Old Norse personal names in England.

Both types of evidence indicate that a wide variety of Old Norse personal names were used in England in the Middle Ages.

The extent of this knowledge must reflect the existence of a substantial community using Old Norse personal names and not simply the naming of individuals after a small number of prominent figures with Scandinavian personal names.

That, however, is far more difficult as most words and personal names in use at the time would have been indistinguishable in Danish and Norwegian forms of Viking Age Norse.

And while runic inscriptions and later manuscripts show distinctive developments in the later forms of Old Norse spoken in Denmark and Norway, the evidence for these divergent developments in Old Norse in England is scarce and hard to interpret.

Some words seem to have been used more commonly in Denmark, such as the Old Norse býr meaning ‘farm, settlement’ and þorp meaning ‘secondary settlement.’ But these words were still found in Norway.

Some personal names like Tóki—found both as a personal name and in place names including Tugby (Leicestershire)—are common in Denmark, but are also found in medieval Norway.

Finally, names like Danby and Normanby/Normanton seem to refer to settlements of Danes and Norwegians respectively. However, it seems likely that these ethnic labels were often applied more generally to refer to any type of Scandinavians.

Read More: Archaeology is being revolutionised by amateur collectors

The linguistic evidence of the widespread Scandinavian borrowings into English during and after the Viking Age, and the frequency of Scandinavian place- and personal names in medieval England, cannot be explained by the settlement of a small number of prestigious Scandinavians.

Overall, the extensive Old Norse impact on the English language and on place and personal naming can only be explained by the settlement of many Old Norse speaking Viking settlers in England.  Unfortunately, the linguistic evidence can´t tell us how many of the settlers came from Denmark.

Explore the time-line above to follow the Danish Viking travels to England (Graphic: Mette Friis-Mikkelsen / ScienceNordic)

Which Scandinavian country is best at getting refugees into the workforce?

Refugee Wail Kadem from Iraq has a clear answer.

Which Scandinavian country is best at getting refugees into the workforce?

Refugee Wail Kadem from Iraq has a clear answer.