Extinct Meiolania tortoise from Vanuatu that has a spiny tail and horns and the extinct giant flightless bird that lived on New Caedonia, Sylviornis neocaledoiae. (Illustration: Author’s own)

The Gallirallus sylvestris – a dodo-like bird - is vulnerable but not yet extinct. (Photo: Wikipedia)

The dodo-like Vanuatu Scrubfowl (Megapodius layardi) is vulnerable but not yet extinct. (Photo: Dubi Shapiro)

Does it really matter if one animal goes extinct?

New study reveals the true extent of famous extinctions like the Mauritian Dodo and the knock-on effects they have on other island life.

Imagine what it must have been like for those early ocean explorers setting foot on new islands full of interesting animals that they had never seen before.

Giant tortoises with horns and spiny tails and gigantic birds that could not fly.

Unfortunately, for the animals, these encounters often led to their extinction. Not used to running away from predators, they were easy prey to hungry sailors.

Explorers also brought along their ship rats, pigs, and cats, which ate the eggs of flightless birds laying on the ground.

But how bad was it? What are the consequences of these extinctions? And can we identify what animals or islands are most at risk?

Extinctions can cause more extinctions

First off, it is not only the animals themselves that are affected. The extinction of island animals in turn affects the plants that co-exist on these islands.

This is because many birds, mammals, and reptiles perform a vital service to the plants by eating their fruits, which contain seeds. After a while, these seeds will come out again and land somewhere else. This is how many plants move between different areas and make sure their little seeds can grow up in a good spot.

If there are no animals left to spread seeds, the plants are at risk of becoming extinct themselves. An island without animals and plants would be a lot less exciting than what the early explorers encountered.

Comparing islands across the world

In our research, we wanted to know just how bad the situation was for fruit-eating animals on islands across the world.

Were some animals more likely to go extinct then others? Have there been more extinctions on certain types of islands?

Together with my colleagues Daniel Kissling and Emiel van Loon from the University of Amsterdam, and Dennis Hansen from the Zoological Museum of Zurich, we investigated data from 74 islands across the world.

We wanted to get the full picture, so we looked at all of the birds, mammals, and reptiles that eat fruit. We also included animals that have recently become extinct. We checked to see whether the island size and remoteness could explain differences between the numbers of extinctions that we found. Then, we compared characteristics between the animals that had gone extinct with those that survived, such as differences in their weight and whether or not they can fly. 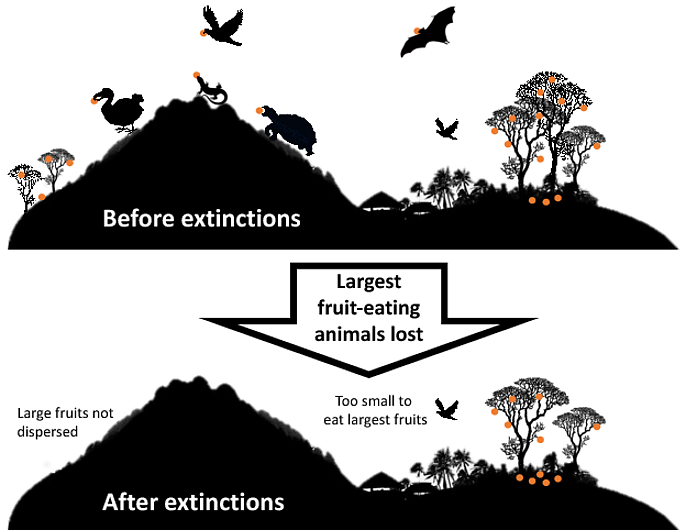 Many large animals that eat fruit (birds, tortoises, lizards, bats) have gone extinct on islands. The remaining small animals cannot swallow and disperse the largest fruits and those plants are now at risk of extinction too. (Illustration: Author’s own)

Large Dodo-like animals are most at risk

We saw that large animals that cannot fly go extinct more often than any other. The Dodo bird on Mauritius is a famous example. But interestingly, we saw a knock-on effect of such extinctions. In fact, the mean weight of all fruit-eating animals on islands has reduced by 37 per cent due to the loss of large animals, such as a giant bird on New Caledonia, several large flying foxes and some of the Galapagos giant tortoises.

The loss of so many large fruit-eaters is extra challenging for the plants. This is because large fruit-eaters have larger beaks and mouths and can swallow the largest fruits. The smaller animals that remain on the islands today are simply not capable of swallowing and dispersing large fruits.

This means that the seeds of large plants are less likely to end up in good growing spots and make little plants of their own. Soon, we may not see many islands with such large trees with large fruits.

Small and remote islands are worse off

This is probably because it is more difficult to escape predators and hunters on small islands. Plus, compared to larger islands, they have relatively little forest and fewer fruiting trees to eat.

So, any problems that occur on small islands can easily have a big impact.

Isolated islands, far away from the mainland have also lost a large percentage of their fruit-eating animals. Again, these animals have lived without predators for a very long time, making them extra vulnerable to hunting by people and accompanying rats and cats. 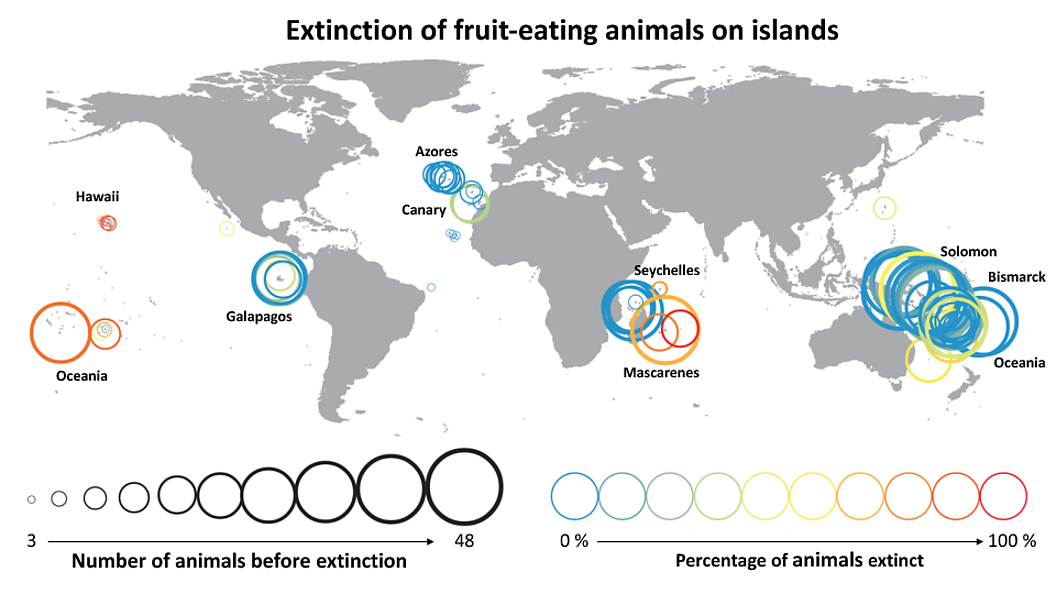 Extinction of birds, mammals and reptiles that eat fruit on islands. Circle sizes show the number of animals that used to live on each island and the colour shows what percentage of these animals have since gone extinct. (Adapted from Heinen et al. 2018, Ecography)

We can prevent further extinctions

All these extinctions are of course very sad, but they are certainly no reason to give up hope!

We now know what animals and islands are most at risk: large animals that cannot fly, such as the Solomon flightless rails and megapode birds, on islands that are small and remote. And we now need to use this information to help prevent extinctions in the future.

Many organizations are working very hard to do this, and there are some great success stories of islands that have been restored to the way they were before humans arrived.

But a lot more effort is needed and anyone can help, either by volunteering for projects, donating or simply spreading the word. Hopefully, we will not lose the many exciting island animals and plants that we still have, and we can continue to be amazed, just like those early explorers.

Could asteroids bombard the Earth to cause a mass extinction in 10 million years?

Are showers of asteroids to blame for regular extinction events? If so, we might be able to predict and even prevent asteroids causing mass extinctions in the future.

A 210 million years old skull found in East Greenland tells a story of a gigantic salamander-like amphibian sporting a set of large fangs.

Our warming planet is pushing some plant and animals species towards extinction. But there’s actually no such thing as untouched nature — humans have always altered their environment. That doesn’t mean we shouldn’t do our best to protect what’s here now.

The famous mass extinction of dinosaurs also impacted oceanic animals and in particular, sharks. A new study reveals how the balance of modern shark biodiversity can be traced back to this very event.

Half of Amazon Rainforests on the verge of extinction

Up to 57 per cent of all tree species in the Amazon Rainforest are on the verge of extinction, shows new research.

People often have mysterious dreams before they die: It is high time we recognize the importance of these experiences, says one researcher

"Patient activism is not behind the British guidelines for CFS/ME"

People often have mysterious dreams before they die: It is high time we recognize the importance of these experiences, says one researcher

"Patient activism is not behind the British guidelines for CFS/ME"